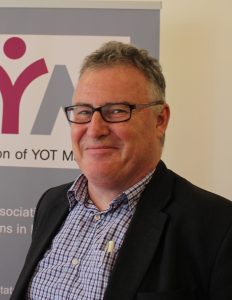 Ian is a qualified Social Worker, who started his career in 1982 working in a variety of residential settings with young people until 1995. Since then he has respectively worked as a Child Protection Social Worker, Probation Officer and Youth Justice Worker/manager. The latter in North Hampshire with Wessex Youth Offending Team.

In 2001 he took up a secondment to the Youth Justice Board as regional performance monitor, before returning to the Wessex Yot 18 months later as their Performance and Information Manager. In June 2004 Ian became Head of Wiltshire Youth Offending Service and in 2009 he returned to head up Wessex Yot.

In April 2012 following the disaggregation of Wessex Yot Ian became the Head of the new Hampshire Yot. In July 2012 he took up a secondment from that role to lead the Supporting Troubled Families Programme in Hampshire before semi-retiring in April 2020.

Ian is a self-confessed sports nut, football, cycling and table-tennis are sports he still participates in or at the very least spectates.