You are here: Home › About us › Private: Board Members › Andy Peaden 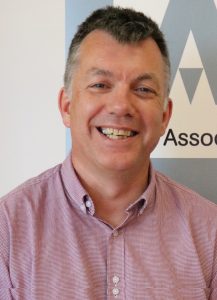 Andy started his career working as a volunteer with Northumberland Probation Service in 1987. He became an Intermediate Treatment worker with Blyth Valley Juvenile Justice team in 1988 and qualified as a Probation Officer in 1991 working in a range of different locations for both Greater Manchester and West Yorkshire Probation services, including 3 years as manager of St John’s Voluntary Probation Hostel in Leeds.

Andy left Probation to go back to the world of Youth Justice in 2003 becoming the South Yorkshire ISSP consortium manager. He became Sheffield YOT manager in 2005 and Assistant Director for Youth Services in Sheffield 2010. In 2011 Andy was seconded into Sheffield Futures (an independent charity delivering Youth services and Connexions) as Chief Executive where he remains a trustee. He moved to Leeds to take up his present position in 2012

Andy’s interests are family, sport, music and travelling; he is desperately clinging onto his 5 a side career and probably spends far too much time watching football and cricket.