You are here: Home › News

By AYM Admin on February 3, 2020 in Consultation responses, News

Members will recall that we launched an online survey in December asking about current governance arrangement for local YOT partnerships. The survey will help shape our contribution to the YJB’s work to update its guidance, ‘Modern Youth Offending Partnerships’. We are grateful to the 48 colleagues who took the time to respond. We have posted the full results here with a summary of the key findings.

The AYM response to the Labour Party Policy review of the criminal justice system was submitted today (Friday 28 June 2019) and can be read here.

The Annual Conference and AGM on 5 June 2019 in Rugby proved to be another great success with speakers providing some really interesting information on peer reviews, sport in prisons, overuse of remands and approaches to serious violence.  The AYM was also pleased to recognise the achievements of four more areas – Blackburn, Hackney, Kirklees and St Helens – in reaching the required standards for our Youth Justice SEND Quality Mark Award. 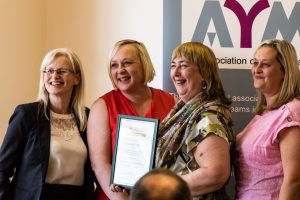 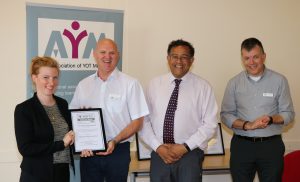 The Youth Justice SEND Quality Mark recognises good partnership work in local areas for the benefit of children with special educational needs. The standards for the award were developed with the support of the DfE and YJB and with input from academics and practitioners. 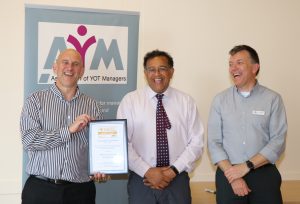 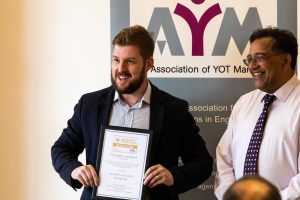 For information on how to gain this award follow this link.

In early June, AYM responded to the Public consultation on Mental Health Conditions and Disorders: Draft Legal Guidance. This is a new revised proposal of CPS guidance on prosecuting defendants with mental health issues. You can read the AYM response here.

Please go to Publications and then Newletters and other documents

AYM have an agreed policy statement about the declaration of convictions (https://aym.org.uk/about-us/where-we-stand/ ) which states;

“Young people moving into adulthood and beyond should not be penalised for having to declare all but the most serious convictions committed as a youth.”

The UN Convention on the Rights of Children (UNCRC) states that “the best interests of the child must be a top priority in all decisions and actions that affect children” (S.3), and that “governments must do all they can to make sure every child can enjoy their rights by creating systems and passing laws that promote and protect children’s rights” (S.4).  Also that “governments must do all they can to ensure that children survive and develop to their full potential” (S.6). So the themes are the child’s best interests, rights and potential. In our view, the current criminal record system is not arranged to achieve these things.

Whilst the UNCRC applies to children under 18 years, it is clear that any convictions acquired as a child will have implications for them as adults. The concept of children learning and developing into adulthood was a central part of your report into the Treatment of Young Adults in the CJS published recently. So young people are still developing into early adulthood, and need our support to reach their full potential. Anything which stands in the way of this, such as previous convictions, will act in opposition to this finding.

Children should not be penalised as adults for behaviour which is often a part of growing up, maturation, and finding their way in life. This can include offending behaviour. We would draw your attention to the Wipe the Slate Clean website at http://www.wipetheslateclean.org.uk which shows successful and achieving respectable people unable to stand in public life for child convictions in the distant past.

The number of people in the UK who have criminal records is quoted as 9.2 million (see http://www.telegraph.co.uk/news/uknews/crime/8580657/Quarter-of-UK-population-will-be-on-new-police-database.html ). This represents a huge proportion of the population who are unable to reach their personal potential, and also unable to reach their potential to contribute fully to society. We are excluding many people from mainstream society and employment, and attaching a stigma to them which is in no-one’s interests. It is also worth noting that although the convictions of foreign nationals can be included in UK records, many are not, and given the proportion of British residents who are born abroad, this could be seen as disadvantaging British people in the employment and wider world. There is also an issue for disadvantaged groups within British society, such as Black and Minority Ethnic (BME) young people. They face daily discrimination, sometimes leading them to criminal behaviour, and yet once they have a conviction their life chances are even worse than before, which again can lead them to further offending to gain status and income.

The issue of which convictions need to be kept on file and declared in perpetuity is pertinent. Our view is that children should not have convictions carried forward into adulthood unless they are of a serious nature. Clearly we would want to ensure that unsuitable people are excluded from caring professions and other similar areas. We have no desire to create addition risk to society by a blanket striking off of all convictions on an individual’s 18th birthday. This would not safeguard other children or vulnerable adults.

So our view is that only the most serious offences should be retained on record into adulthood. By this, we are content with this existing exemption list of professions, and also with the criteria of a custodial sentence of 4 years or more being never spent, as per the 1974 Rehabilitation of Offenders Act (ROA), as amended by the 2012 Legal Aid, Sentencing and Punishment of Offenders Act.

We would wish to see the deletion of criminal records acquired under the age of 18, on reaching that age, with the exception of those most serious offences. This may not be so easy to achieve where children are still offending in the transition to adulthood, so some arrangements may be needed to manage those situations. For example, a period of time between last conviction or end of sentence and them being wiped out, such as 6 months; and if the young person reoffends during that period then the timeline would start again from end of sentence.

‘Young adults’ is a term which varies in legislation. Differing research suggests that adulthood is not something which people reach on their 18th birthday. The care system recognises that Looked After Children (LAC) need support to 21 or 25 depending upon their needs and circumstances. Around 40% of YOT caseloads are LAC, and so represent a significant proportion of young offenders. The current legal system of young adults being treated as fully responsible adults is questionable (as suggested by your recent report), and we would support changes to this along the lines of LAC legislation.

We also believe the age of criminal responsibility is too low in England and Wales, and our Association’s position is that it should be raised to at least 12 years old. Many of our members feel it should be higher. There are other models around Europe where criminal responsibility is much higher than in the UK, some as high as 18. These countries thus allow children to transition to adulthood without the constraints of a criminal record.

Employers have a right to be protected too. However, these rights are not enshrined in law to the extent of children’s rights. There are already effective safeguards in place via ROI for critical roles, which we support. Employers have a right to ask about a person’s background before offering employment, especially in terms of dishonesty and violence, and we need some clarification in law about how far these go to ensure both parties are treated fairly. We quote one example at the end of this submission which shows the need to lie about convictions to get an interview, at which point the person is on the back foot – see below. So some guidance for employers would be useful, ideally enshrined in law so it can be enforced.

We have also provided a number of real life practice examples to the Justice Select Committee and offered to present our views in more depth at an oral enquiry.