On 16 October, we had a very successful AYM Autumn conference at the University of Derby. Many thanks to the venue and Jo Church and Unitas for hosting this event.  More information and discussion can be found on twitter #aymautumnconf 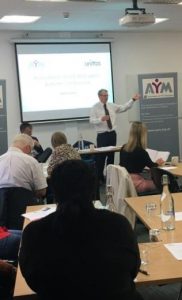 Rob Allen is an independent researcher and consultant on criminal and youth justice. He was director of the International Centre for Prison Studies at King’s College London from 2005-10 and previously held senior roles at NACRO and the Esmee Fairbairn Foundation, where he ran the Rethinking Crime and Punishment initiative.

Rob was a member of the Youth Justice Board for England and Wales from 1998-2006. Since 2010, he has worked on a variety of projects in the UK and abroad including work on youth justice for the University of Salford and for Unitas.  Rob writes a regular blog at https://reformingprisons.blogspot.com/ 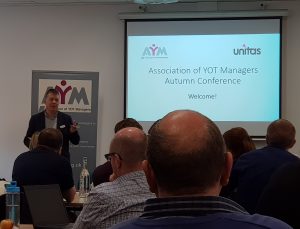 2 and is the current Chair of the AYM.

Andy has had a varied career, commencing as a volunteer with Northumberland Probation Service in 1987.  He became an intermediate treatment worker with Blyth Valley Juvenile Justice Team in 1988, qualifying as a probation officer in 1991.  Andy left Probation to go back to the world of youth justice in 2003, becoming the South Yorkshire ISSP Consortium Manager and in 2005 the Sheffield YOT Manager.  In 2010 he was appointed Assistant Director for Youth Services in Sheffield before being seconded as Chief Executive in Sheffield Futures (an independent charity delivering youth services and Connexions)
where he remains a trustee. 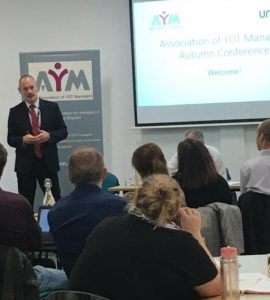 Phil is a former criminal justice practitioner who has worked in the police, probation, youth justice and drugs arenas.  He was previously a Research Manager for NACRO and worked on a variety of research projects within the criminal justice system, including the Home Office funded ‘Testing on Arrest Scheme’ and a number of youth justice evaluations.  Since entering academia, he has developed a number of policing programmes (both UK and International) and has conducted research on areas such as Anti-Social Behaviour, Body Worn Video and Policing, Child Protection and the Troubled Families Project.

Sally is Director of Inclusive Learning Solutions.  She has been closely involved in the development of the Foundation Degree and the new BA Hons in Youth Justice.  She is also responsible for the design and development of Effective Practice Awards, which will be offered through the Youth Justice Institute Learning Hub.

Vicki oversees the project management of the Centre’s practice, research and policy 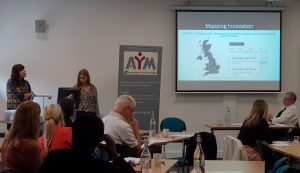 work. Claire is in charge of the Centre’s innovative practice work.

Vicki’s current areas of focus include youth diversion, problem-solving in the youth court, adult diversion and Family Drug and Alcohol Courts. She has considerable knowledge and experience of operations and practice in the criminal justice sector through her previous role in a young offender institution and her study towards a degree in Youth Justice.

Claire works with practitioners to gain a better understanding of the problems they face, supporting them to develop, test and embed new or improved ways of working and identifying and sharing lessons from the implementation of new projects. Claire has extensive frontline experience of the criminal justice system from her time as a probation officer, most recently as Serious Group Offending (Gangs) lead in Southwark.

Slides with be posted here after the main report is published.

Anne-Marie is currently a Research Associate on a study entitled ‘The Pathways of Incarcerated Children in Care’. Working with Tim Bateman and John Pitts, they are seeking to understand t 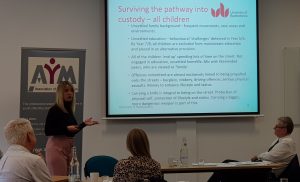 Before making the move into academia, Anne-Marie was a senior policy adviser for the Youth Justice Board, had held various management positions in Trafford Youth Offending Team and was a probation officer in both custody and the community. 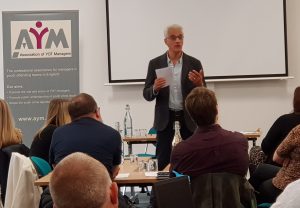 Steve founded the Oasis Trust back in 1985 with a vision to build inclusive local communities. Oasis is now one of the largest charities in the UK, as well as working in a host of other countries. It provides housing, education, healthcare, various other community-building initiatives and is now working with the Ministry of Justice to create the UK’s first Secure School.

Steve is also an author, speaker, former UN Special Advisor on Human Trafficking and a Baptist minister.  He holds an MBE and various honorary fellowships, all awarded for his work in social inclusion and justice.  He still leads Oasis and is also the senior minister of Oasis Church Waterloo in central London – a place of inclusion where all are welcome.

Justin joined HMI Probation as Chief Inspector in June 2019, on a three-year fixed term. Justin’s previous role, from 2016 to the beginning of 2019, was as Director General, Justice An 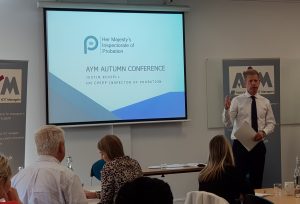 alysis and Offender Policy at the Ministry of Justice.

Justin started his career as a social researcher in the Home Office and has worked on a wide range of criminal justice issues including as a Senior Policy Adviser on home affairs in the No10 Policy Unit and as Head of the Violent Crime Unit in the Home Office where he led the Ending Gang and Youth Violence Programme and the government’s strategy on ending violence against women and girls.

From 2012-2016, he was a Director at the Department for Work and Pensions where he led the production of the 2013 White Paper on state pension reform and was Director for disability employment and support.